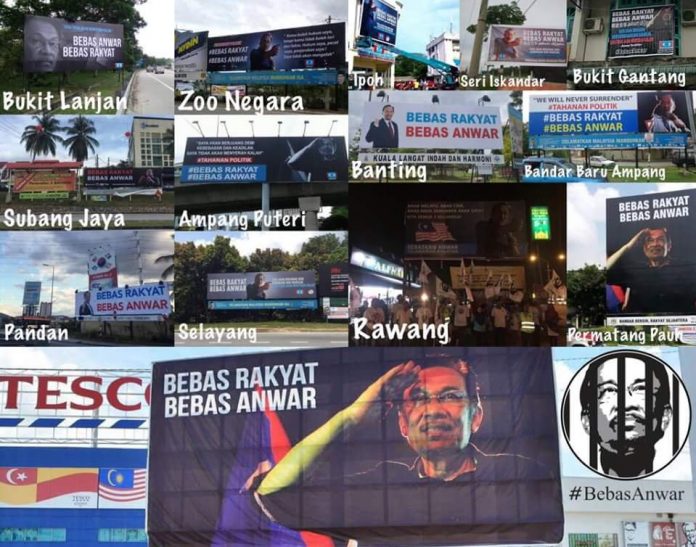 The police who arrested three men for putting up the banners with these words owe us an explanation as to why this banner is considered seditious, writes P Ramakrishnan.

We are perplexed as to what is seditious in a banner put up along Jalan Permatang Rawa in Bukit Mertajam. The banner carried the words “BEBAS RAKYAT BEBAS ANWAR” (Malaysiakini, 30 December 2016).

The banner was meant to promote a rally for Anwar in Seberang Jaya on 9 January next year.

Three men have been arrested and questioned for putting up these banners. Similar banners strung up at Alma, Bukit Teh and Permatang Tinggi in the last two days were also removed by police.

We wonder what is seditious in the banner? Bebas Rakyat or Bebas Anwar? Or which word has the seditious tendency? Bebas? Rakyat? Anwar?

In what way can any of these words be considered seditious?

Try as we may, we are unable to fathom where the seditious tendency could be in this.

All of us are expected to have a name. We don’t have a choice in choosing our names. Names are given to us. We inherit our names. That being the case, how come the name Anwar has seditious tendency? Is it the fault of Anwar’s parents for so naming him?

The police who arrested these three men for putting up the banners owe us an explanation as to why this banner is considered seditious. If they are unable to do so, it would mean that their response was an unthinking action prompted by some stupid police report made by some moronic elements.

The Seberang Perai Tengah police chief, Nik Ros Azhan Nik Abdul Hamid, was quoted as saying, “Police initiated an investigation under the Sedition Act after receiving police reports from members of the public about the installation of the banners which were allegedly seditious.”

If we understand him correctly, the police reports claimed that the banners “were allegedly seditious”. That claim had not been proven true. They remain mere allegations.

Yet these men were arrested for sedition! The arrest was summarily made without regard for the due process of law that demands prior judicial pronouncement in open court after hearing arguments on the facts and submissions on the law that “the matter” is seditious

The police chief had even advised the rally organisers to stop installing such banners without establishing the fact that they are indeed ‘seditious’.

The way the police are arresting and detaining Malaysians on various grounds of ‘sedition’ involving journalists, politicians, activists, cartoonist, lawyers, students, lecturer, etc is mind-boggling to thinking Malaysians. We wonder if there is truth in the saying, “Do you think it’s possible for an entire nation to be insane?”