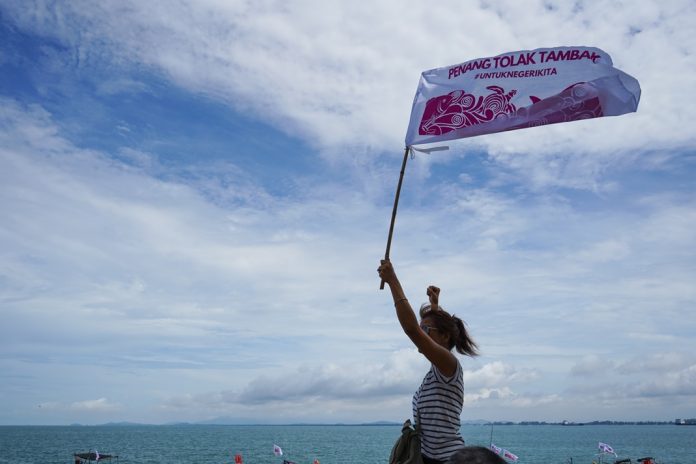 This open letter is addressed to the Penang chief minister of Penang in response to the seven main points from his media statement given on June 13 titled “Response statement on the issue of fisheries resources at the Penang South Islands project site”.

I have stated the answers to each of the main points as follows:

1. Penang is losing the opportunity to develop

Actually, the state government will lose the opportunity of owning 70% of the holding of Island A if the Penang South Reclamation project is continued.

Penang has never lost the opportunity to develop – even without sea embankments. The development of Seberang Prai is the future of Penang which must be given priority and of course the 70% stake in Island A can be avoided.

What the state government is doing now is akin to a husband that wants to lead a life of luxury by borrowing to buy an expensive car, while his wife’s jewellery is mortgaged. The idea of development is supposedly clever, apparently by mortgaging public property rights.

Where has the Penang state government’s call for ‘open tender’ all this time gone? Have your calls been swept away by certain interests or are you too desperate to continue the Penang South Reclamation even by mortgaging strategic coastal land for the sake of a beloved developer?

2. Penang would lose the opportunity to create jobs for the people

If it is true that the reclamation creates employment opportunities for the people, what has happened to phase two of the Seri Tanjung Pinang reclamation project, which is currently largely abandoned?

In my opinion, if even phase two of the Seri Tanjung Pinang reclamation project is groping for investors now, do not daydream of being able to take on the Penang South Reclamation!

Enough with this false promise that has no black-and-white guarantee. The one-off compensation of RM20,000, which is solely limited to boat captains and supposed to sustain them for the rest of their lives, is already considered an insult to the fishermen. For the record, their crews’ lifetime compensation is far less than this amount.

If that is indeed the offer, then it is appropriate for the chief minister to talk about improving the socioeconomic status of the fishermen.

The Penang South Reclamation area should be made far from the strategic bay area for fish and shrimp breeding. By the same logic, why not the reclamation be done in a vast area of the ocean, more than 10 nautical miles off the coast of Penang?

Of course, a special 250m navigation channel would no longer be needed. Of course, the residents of the area will have more privacy and safety in the middle of the sea.

Why should the state government instead encroach on rich fishing grounds?

5. The southern region only contributed 4% to fish production in 2015

If indeed fish production has only been a meagre 4%, this means that all this time the state government seems to have deliberately allowed the production to be low as an excuse to support the Penang South Reclamation.

It makes no sense to cunningly plan such a failure for the sake of the evil agenda of the Penang South Reclamation.

The state government should focus on increasing the measly 4% figure, instead of implementing the reclamation, which would inevitably shrink the fisheries output.

6. The state government will ensure that reclamation work takes place in a controlled manner and does not cause pollution

Too many promises have gone unfulfilled and have even led to disaster. Phase two of the Seri Tanjung Pinang reclamation is obvious evidence that the sea in the Tanjung Tokong area has been polluted. Why pretend not to know this?

The state government has a longstanding track record of failing to control development projects that cause disasters and deaths such as the incidents at Bukit Kukus and Granito, Tanjung Bungah. The results of the investigation have been kept under wraps, away from public scrutiny even until now.

The Penang South Reclamation with the presence of dredgers transporting waste will risk the lives of fishermen with their small boats when the waterway traffic in the area becomes busy.

7. The state government would like to emphasise that they do not have to make a choice between developing Penang South Reclamation and defending the fate of fishermen for food security. Supposedly both can be chosen

What actually happened was the state government voted to;

c) drive fishermen with small boats further away from the coastal sea.

The fishermen continue to have to bear the high costs of operating while the favoured developers continue to be pampered with special offers from the state government as blue-eyed partners.

The state government really loves Gamuda Bhd’s 60%-owned single purpose vehicle SRS Consortium Sdn Bhd, right? Is this what is meant by “not intending to underestimate” the contributions of coastal fishermen?

As the saying goes “monkeys in the forest are breastfed, while your own children at home are starving to death”.

Hopefully, the answers above can be accepted with an open heart by the chief minister, and it would enough for all parties to make an assessment of the unfolding catastrophe. – The Vibes