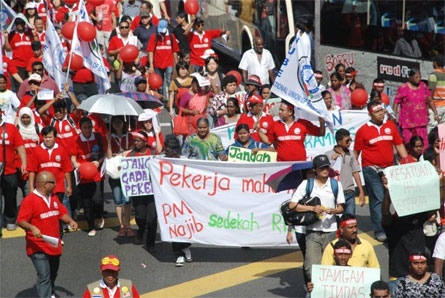 Ronald Benjamin hopes that in the new Malaysia, industrial relations will take a leap forward in clarifying the values which can enhance human dignity.

The world celebrated Labour Day on 1 May. As usual, there were labour rallies around the world, some of which took the form of protests against human rights abuses against workers especially immigrants.

There were also protests directed against the neoliberal economic system, which favours big corporations that dominate the economy in which financial wealth, land and technology are controlled by business elites.

This is at the expense of millions of people who continue to live in extreme poverty. In this system, taxes are reduced for the big corporations while ordinary men and women have to bear the high cost of living and lower social security protection.

Looking at the global economic system and its players, what is lacking are common values: there is a lack of consensus on values among business elites, the workforce and governments about what constitutes a just and fair economy. In Malaysia, there is a similar lack of consensus among business elites and unions on values and how to drive the nation forward.

The business elites are more focused on cost-cutting and profiteering while the workforce is more concerned about a minimum wage, work-life balance and compensation benefits. This turns into polemics between profits on the one hand and workers’ rights on the other.

Human Resources Minister M Kula Segaran has made consultations between employers and employees as the way forward in building human capital. There has been an emphasis on collaboration instead of the old mould of a master-servant relationship.

Consultations on the impending amendment to labour laws have been initiated or supported. But such efforts will not achieve the desired result if common values are not deliberated and debated till a national consensus is found on how to enhance human dignity through human capital development in industry.

The founder of the World Economic Forum, Klaus Schwab, in his book Shaping the Future of the Fourth Industrial Revolution, quotes a new social covenant on values by the WEF’s Global Agenda Council on Values (2012-2014) that states that there is great cultural diversity when it comes to values. But there is also a broad consensus across cultures, religions and philosophies on some shared, human aspirations as follows:

The question that arises is, do our industrial relations reflect the above? The answer is clearly “no” due to the absence of a consensus on common values between employers and unions.

It is hoped that in the new Malaysia, industrial relations will take a leap forward in clarifying the values on how one can enhance human dignity and on what values these are.

Hopefully, the Workers’ Day celebration provided time for the government, employers and workers to reflect, discuss and collaborate on common values to enhance human dignity in this age of technological innovation – instead of continuing the shortsighted polemics between capital and labour that does not benefit the nation in terms of the common good.