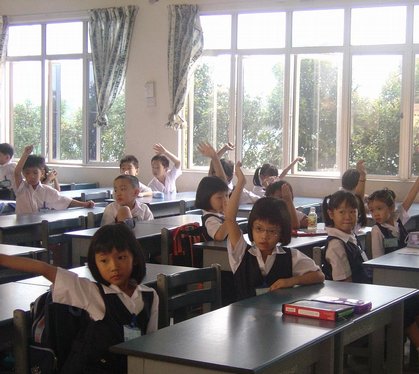 It does not add up that a teacher who raised concerns about the primary school maths syllabus being too advanced for children was threatened with dismissal or demotion by the Ministry of Education.

Mohd Fadli Mohamed Salleh, a maths teacher at a primary school in Gombak, also expressed concern about heavy school bags and the large number of students in each class, which have been long-standing grievances among many schoolchildren and parents.

The teacher has taken his criticisms very seriously to the extent that he reportedly expressed willingness to give up his career if no action is taken by the authorities. Surely, such concerns for students and the education system do not deserve harsh penalties.

And it is appalling that such criticisms only now caught the attention of caretaker Education Minister Radzi Jidin. This is after Fadli reportedly tried in vain many times to get the minister and certain ministry officials to listen to his complaints and act on them.

The teacher claimed that he had tried to go through the so-called proper channels to air his grievances, but the officials concerned had stonewalled.

This probably explains why he had resorted to venting his frustration on his Facebook, which then became a bone of contention for the powers that be as that was regarded as a violation of civil service procedures.

To tick the teacher off instead of immediately addressing the issues he raised is obviously a recipe for poor management, the impact of which would eventually be felt by teachers and their young charges.

The ministry is expected to manage properly and effectively an education system that would help shape our future generation, which is our vital human capital.

Any initiative or feedback aimed at improving the education system ought to be welcomed and entertained as soon as possible to prevent the system from being fossilised and, thus, difficult to adapt to changes.

That is why it made Fadli and concerned Malaysians wonder why Radzi finally decided to look into the teacher’s complaints now, just before the general election when the minister had been alerted about these issues a long time ago.

Caretaker Prime Minister Ismail Sabri Yaakob also waded into the controversy, expressing hope that the ministry would arrive at a “positive decision” in a recent disciplinary board meeting to decide Fadli’s fate.

Against such a backdrop, it appears that Radzi’s willingness to meet up with Fadli, who has a large following on Facebook, at this juncture smacks of political expediency and also because it possibly was prompted by public outrage.

It would have been proper if the ministerial invitation to the meeting was made in writing directly to Fadli, instead of posting it on the minister’s Facebook. This would have shown that the latter recognises the seriousness and urgency of the matter.

And it also did not help that Radzi was quoted as saying, “If he has time, we can meet.” The minister could have been assertive by insisting that the teacher make time for the encounter.

Teachers deserve the kind of treatment from the education authorities that is in keeping with the former’s significant role in society. – The Malaysian Insight