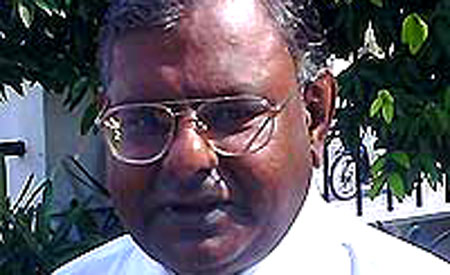 It has been 10 years since G Balasunderam, a lawyer for the marhaen (common people) was killed in a violent knife attack as he alighted from his car outside his house to let himself in.

It didn’t take long for it to dawn on us that someone had planned in detail and paid hitmen to execute the murder. But how could it be possible that a kind and gentle soul like him – tough-looking and loud exterior notwithstanding – be so desperately hated?

Ten years later, Bala’s needless death on 16 November 2010, remains a mystery unsolved. Only one thing is certain – the evil being behind the murder had been on the receiving end of one of Bala’s initiatives in the name of truth and justice.

The suddenness of Bala’s death was totally unacceptable then as so many of us had been in touch with him – had a meal together or received a call or a witty text message from him in the 24 hours before the tragedy.

Just a day earlier, he had turned up at the Ipoh High Court as co-counsel with Vengkat, his soul buddy, to appeal against the conviction of four activists, including Segar of the Socialist Party of Malaysia (PSM), who had gathered with hundreds of others to demand the relocation of a rubber factory that was polluting the Kuala Kuang New Village in Chemor.

Bala was involved in many legal battles fought between poor, oppressed communities on the one hand and developers or the government on the other.

One day in March 1996, close to 200 villagers from Kampung Chekkadi marched to the Buntong Police station to make a few police reports against forced evictions.

They ended up all being arrested and detained as the presence of the Federal Reserve Unit (riot police) blew up the issue.

Bala, who had not yet started legal practice in Ipoh then, turned up on his own accord to make a police report on the unlawful arrests. He didn’t know us then, but what he had heard must have made him indignant enough to act.

That was the Bala we got to know – he would “tremble with indignation at every injustice” and step in to play a role.

Since then, first Alaigal, a community organisation working in the estates, and then PSM virtually claimed Bala for our own, endlessly taking him away from his paying cases to do our pro bono cases.

He worked round the clock, giving his best, researching and scrutinising all aspects while preparing our cases.

Bala had no illusions about the Malaysian judiciary and often groused about it. There were many “impossible” cases he fought for us. These were usually eviction cases brought about by or taken against the government or plantation companies or developers.

READ MORE:  Sevan Doraisamy on finding the courage to fight for what’s right

He was also our counsel for the election petition filed by the Sungai Siput parliamentary candidate, Dr Michael Jeyakumar Devaraj in challenging the 1999 general election result for the constituency.

Bala was the de facto legal consultant for PSM, and he and Vengkat formed a formidable team whom we could rely on for sound legal advice, able representation and free services.

He was ever generous with his time, always ready to discuss and throw light on the many legal issues that cropped up in our work.

In all our cases, Bala’s standard advice was for us to keep up and carry on the ground fight while he took care of the court battle. He believed in people’s power and had little faith in the judiciary meting out justice.

His complementing the ground battle with his competent legal representation helped win many victories for communities marginalised by development. He was humble about his talents and scholarship and would appear in gatherings of the poor communities he was representing and just fit in without fanfare.

No one is indispensable we often hear, but for PSM and the marhaen, Bala was indispensable. And if not for the escalating lawlessness in this country, he would still be with us today.

Bala had no known enemies, certainly no one he had harmed enough to pay with his life. If only more attention and resources were spent by the government on identifying and addressing the underlying causes of crime in the country, life and limb would have the value and sanctity it once had.

Bala’s family lost a doting father, a beloved husband, a very dear son and an esteemed brother. Those who knew him lost his valuable and selfless friendship. PSM lost a comrade in its struggle for a more just society. The working class and marhaen lost a spirited fighter.

And 10 years on, there is still no justice over his murder.