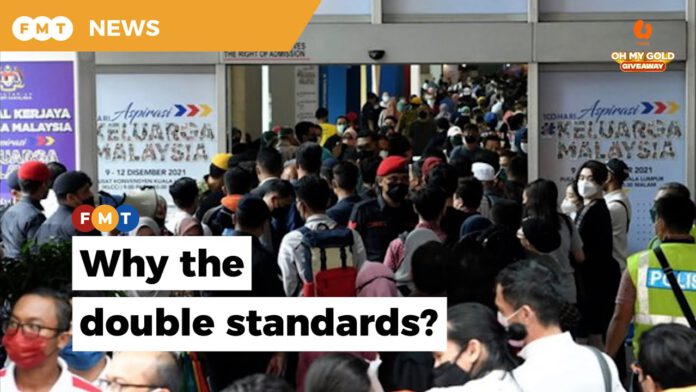 It was meant to be a celebration of sorts by the Malaysian government.

That was the day when the government awarded itself a 90% performance grade for the first 100 days of Prime Minister Ismail Sabri Yaakob’s stewardship.

Instead, the big day drew a stream of flak on social media and a few independent news portals.

First, the reasons for the criticisms were obvious. In the world of management, any performance evaluation must be carried out independently and impartially.

But when ministers themselves presented their own achievements and collectively agreed that the Ismail Sabri government had achieved dramatic success in 100 days, many saw through the veil of self-glorification.

Second, a massive crowd assembling at a venue to walk through the showcased successes drew even more suspicion. Many asked what was so difficult in getting staff from every ministry to be present to make the crowd look more impressive.

Shouldn’t the prime minister see the merit in asking ordinary people to assess the 100-day performance of his government instead? A pool of eminent experts and civil society leaders, together with independent audit experts, could have easily given their assessment. This would have been perceived to be independent and transparent.

But that was not to be.

Shouldn’t the Prime Minister’s Office have invited all representatives of civil society interest groups, including heads of religious organisations and professional bodies and representatives from consumer bodies, to be the guests of this well-manicured expo-like public showcase event? Instead, it was filled with civil servants operating under orders.

So can we blame many for raining on the parade of the government’s celebration of its 100-day performance. No wonder many ordinary people labelled an exercise in self-glorification.

How will Ismail Sabri survive this failure to secure a nationwide buy-in, in a climate where people are still reeling from the pandemic, with 4,000 to 5,000 fresh cases daily, despite a 90%-plus vaccination rate?

How will the government approach the general election when the recession is biting deeper into many segments of population despite the Ismail Sabri administration’s celebration of its 100-day performance?