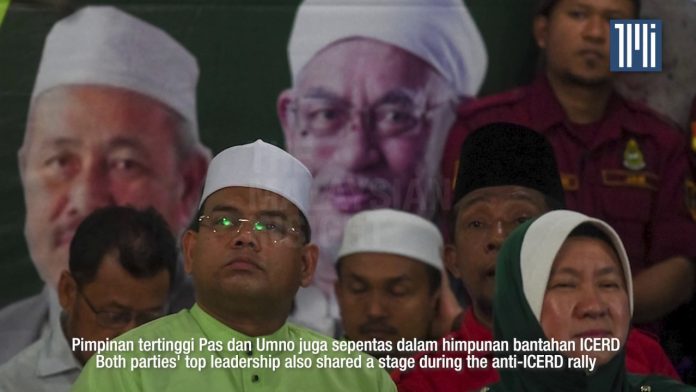 The Umno-Pas alliance is nothing more than an elite struggle for power using emotional memories and nostalgia to deceive voters, writes Ronald Benjamin.

Credible memories do not take on a single dimension, but a collective synthesis, related to our senses, interaction with others, data and context of one’s experiential learning.

Concepts or ideas cannot be formed from a single ideological framework since the potential of learning is vast and diversified.

The very basis of human freedom is the ability to explore and synthesise a complex world.

The so-called Umno and Pas alliance using the term “golden age of Islam” to revive the country is based on a flawed analysis due its thinking that the glory days of Islam is the single effort of Muslims.

It is in this superiority context that Christianity and liberalism are seen as a threat since its challenge to Islamic authoritarianism.

The call to boycott non-Muslim goods also illustrates a thinking of singular obsession with the superiority of a religion.

The question is can Muslim countries survive without the help of non-Muslims or vice versa. We are in an interrelated world where the strength of all communities is needed to preserve the planet.

As for the golden age of Islam, one has to keep in mind that the contributions of other civilisations are well recorded. For example, Christian influences could be traced back to eastern Christianity that surrounded the origins of Islam.

Nestorian Christians with their strong grasp of philosophy, science, art and culture contributed to Arab Islamic civilisation during the Umayad and Abbasid period by translating works of Greek philosophers into Syriac and later, Arabic.

In art, Roman and Byzantine styles were prevalent in early Islamic architecture.

Even in trade, the Armenian Christian merchants due to their education and business acumen played a major role as middlemen for Islamic dynasties in the silk business with the West.

Currently, many Muslim countries are dependent on the United States, China, Russia and Europe for trade and technology.

One wonders how the Umno-Pas alliance in the so-called golden age fantasy is going to change anything.

What is obvious is that Malaysia’s discourse has been centred on Islamic contribution and issues with the West or with the non-Muslims, rather than how the synthesis among cultures and civilisations has contributed to humanity.

Today, various civilisations have had their golden eras. The present is far more important than memories that one does not learn from.

It is obvious that with the failures related to corruption and rejection by voters, Umno and Pas turn to primordial ethno-religiousity for political support.

This is done by claiming the singular aspect of religious superiority, believing it will solve one’s political woes, and complex problems facing the Muslim community and the world at large – which clearly reveals a hostage mind.

Great memories of civilisations have broader narratives and cannot be attributed to a single religion and culture.

The Umno-Pas alliance is nothing more than an elite struggle for power using emotional memories and nostalgia to deceive voters.