Home Web Specials When words of past catch up 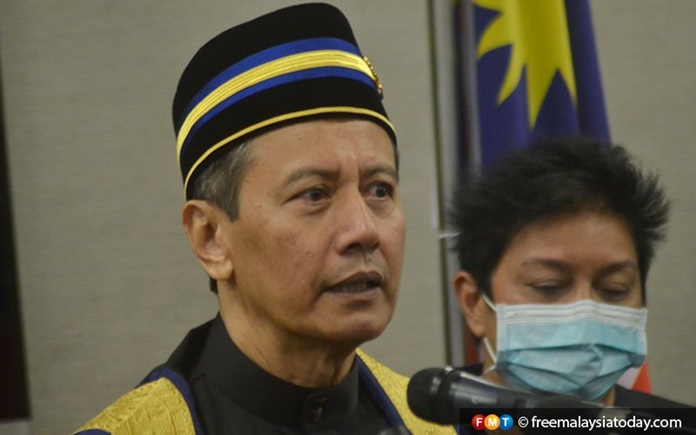 The new Speaker of Parliament is being judged against the noble values that were supposed to be close to his heart. Mustafa K Anuar writes.

There was commotion in a parliamentary sitting recently when the newly minted Dewan Rakyat Speaker Azhar Azizan Harun was accused of being biased in favour of the ruling Perikatan Nasional pact.

Opposition lawmakers took exception to what they perceived as Azhar’s partial intervention in explaining, on behalf of Finance Minister Tengku Zafrul Abdul Aziz, an issue regarding Putrajaya’s out-of-court settlement with US investment bank Goldman Sachs.

Former Finance Minister Lim Guan Eng earlier asked if the US$3.9bn settlement had been approved by the cabinet, to which Azhar swiftly responded that it was expected that such a decision made by the Ministry of Finance would have cabinet approval.

Lim then snapped that such a matter of serious gravity should have had better accountability and oversight.

In his defence, Azhar said he was merely managing time when he made the intervention.

Azhar is not new to controversy, especially for someone whose very appointment was subject to heavy criticism as it was not put to a vote, as is the normal parliamentary practice.

On his first day of work in the Dewan Rakyat, Azhar courted another controversy when he was entangled in a brouhaha over sexist-racist remarks made by a PN lawmaker against a woman opposition MP. He was perceived to have been lenient initially in his reprimand of the offensive lawmaker.

It appears that former Election Commission chairman Azhar has been in the spotlight since he was appointed Speaker – perhaps because his predecessor, Mohamad Ariff Md Yusof, might have raised the bar a bit too high for the newcomer to attain.

But there is also another reason worth considering: Azhar is now judged against noble values that were supposed to be close to his heart.

Prior to his ascension to the exalted position, Azhar was known to be an activist – his critics now ungenerously call him “so-called activist” – who was particular about integrity, justice and professionalism, among others. He had run at one time a series of online video presentations that talked about the finer aspects of law, discussing political and social issues, presumably to make a difference in society.

One video podcast, presented by the Malaysian Insight soon after Pakatan Harapan came into power, is hauntingly relevant to the current Parliament as it showcased Azhar, then a practising lawyer, passionately discussing the vital role that the Speaker can play. He underlined the important role of the Speaker to ensure adequate answers from ministers to queries posed to them and to exercise the powers vested in him or her to allow for robust debates on issues of public import and urgency.

In the video, Azhar also criticised Ariff’s immediate predecessor for having abused his powers as a Speaker, such as not allowing the Opposition time to give their views on a particular bill on the table, chasing MPs out of Parliament for some strange reason, and being unable to control unruly behaviour and expressions of sexist remarks.

On the qualities essential for the Speaker, Azhar said he or she must have integrity, be fiercely independent, and know the parliamentary procedure “like the back of his hand”.

Only time will tell whether these important words were spoken by a person who sincerely intends to translate them into action when given the appropriate platform in the interest of democracy.